House Speaker Nancy Pelosi’s staffers have been racing for the exits at an unprecedented speed, per a new data analysis.

The surge in staff departures lends weight to widespread rumors of Pelosi’s imminent retirement — which are already stoking fear and loathing among Democrats.

Pelosi’s “turnover index” — a measure of office churn weighted by salary — spiked in 2021 after having been relatively average and stable during her three-plus decades in Congress, Politico Playbook reported Tuesday, citing LegiStorm, a congressional data service. 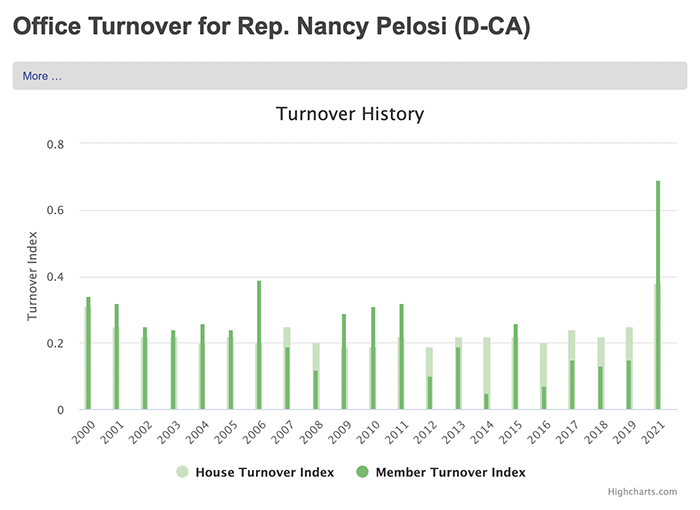 According to LegiStorm, Pelosi’s turnover index last year was in the 90th percentile of congressional offices and almost double the average.

While Pelosi has refused to discuss her future, she has not renounced her 2018 promise that this will be her last term as speaker, and her expected retirement is weakening her and dividing her caucus.

Meanwhile, Rep. Bobby Rush of Illinois on Tuesday became the 24th House Democrat to announce retirement ahead of the 2022 midterms, which are widely expected to see Republicans retake control of the House.

The 4PM: A highlight reel of today’s news.
For conservatives.
Every afternoon at 4PM.